Kaos travelled to compete in the Asia Oceanic Ultimate and Guts Club Championships (AOUGCC) in August this year. The team put on a stella performance finishing 4th place in both standings and spirit. It was an honour to play against such passionate opposition on the international stage. We caught up with two of our players when they got back to talk about their tournament experiences and just ulti in general. This was Sophie Thompson’s first international frisbee tournament and only her first year playing ultimate! Lauren Hoskins is a veteran of Kaos and the Perth frisbee community. Here’s what they had to say: 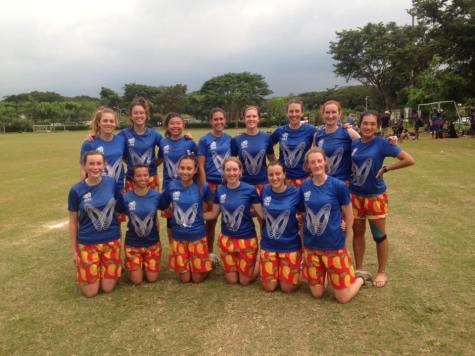 Name: Lauren Hoskins
Frisbee Name: Snooki
Kaos Number: 1 (But if Kiza ever lets go of #11 I’m claiming it!)
What is your ulti history? I started playing PUL in 2009, but quickly made lots of new friends and it spiralled from there! In 2012 I was bold enough to join the Kaos training squad and never looked back. In 2014 I travelled to Italy to play World Clubs in the Women’s masters division with Primal. That was a huge eye opener to just how big the sport is and how it unites like-minded people around the world. But Manila this year was next level! To play internationally with Kaos was easily my most enjoyable tournament to date!
What keeps you hooked on Ultimate Frisbee?
There are so many reasons! Fitness is obvious, and the social aspect is phenomenal because it’s self-refereed and attracts the right type of people. Ultimate uses the perfect amount of strategy to keep my mind interested. My job can have reasonably high-stress moments, so I love the chance to finish off the day with a hard workout surrounded by positive and supportive teammates. I’m also super goal-oriented, and sometimes when things aren’t going quite right in other aspects of life you get the chance to celebrate that you did something else right that day. Maybe I learned a new defensive tool, or nailed a difficult footwork pattern I’ve been working on, or perhaps even helped a teammate have one of those “breakthrough” moments. It just gives you that sense of purpose because you took another step towards a common goal your team is working on. I think that’s the biggest thing for me.
How did you prepare for this tournament?
Well, in keeping with my usual theme I started with an injury! Which meant the usual team fitness sessions, plus extra rehab/strength with my Physiologist (Valetudo Health). For skills, the squad training sessions were focussed around building familiarity with our newer members, recognising space, and developing strategies to capitalise on our physical height advantage against the smaller Asian players. Poor things!
What did you learn throughout the training campaign?
There is no “one” way to achieve anything. Sometimes a risky throw to a safe option is a good thing. And not everyone needs to be good at the same things – the best thing about being part of a team is you can use your different strengths to complement each other.
Did you have any personal goals for the campaign or tournament? Were they achieved?
I wanted to make decisive cuts. Which is not too hard with a team you’re quite familiar with like Kaos. Another goal was around defensive pressure on the mark, and “eyes up” awareness, and I executed that one well – I got a few hand blocks which was really satisfying! But one of my goals was not to drop anything – and unfortunately, I dropped something in my first point on the field.
What was the hardest part of the tournament for you?
Apart from my lack of sleep from the overnight flight… The humidity! I’ve never sweated so much in my whole life and I just felt so tired. But it kind of united the team, because we were all enduring these horrible conditions together and pushing through it anyway.
What was the highlight of your trip?
The final day – we played some amazing teams and learnt heaps from the other countries, but then at the end of the tournament this huge party broke out on the fields and we just had so much fun.
What’s next on your Ultimate bucket list?
If everything goes to plan – then World Clubs in the USA next July!

Name: Sophie Thompson
Frisbee Name: Saucy
Kaos Number: 82
What is your Ulti history? This is my first year playing ultimate Frisbee and I’m completely hooked!
What attracted you to the sport?
All through uni and work I’ve heard Ebs excitedly talk about her amazing Ultimate Frisbee club – the awesome women she plays with, the exotic places she’s played and how in-depth and fun the game is! I was looking at taking up a sport and she sold me on the feeling of community that Ultimate Frisbee provides.
How did you prepare for this tournament?
Lots of running! I tried to find lots of extra opportunities on the weekends or during my lunch breaks at work to build my fitness to help cope with the tough conditions I knew we’d experience (many Kokoda Track sessions in Kings Park helped!)
What did you learn throughout the training campaign?
I learnt a lot about how to position myself as a defender – sometimes a more lateral position with a smaller buffer gives you better control on shutting down the opportunity for an under cut. I also became much more situationally aware on the field – being able to read the play and keep free space open.
Did you have any personal goals for the campaign or tournament? Were they achieved?
One of my personal goals was to absorb and learn as much as I could. As a new player there was no better way than to play with some incredible, experienced players and vs some incredible women’s teams! My other goal was just to make the most out of every second on the field (and off)! I knew the tournament would be over in a flash and I wanted to come away with no regrets; that I gave 110% and enjoyed the entire experience. I definitely feel that I achieved this!
What was the hardest part of the tournament for you?
For me it was the weather conditions. Going from a rainy, cold winter in Perth to a hot, humid climate where you are exerting so much energy was a real challenge. Day 1 was the hardest but I became more and more acclimatised as the tournament went on. I am also so thankful and grateful for my team mates – they were feeling the heat just as much as I but they always found that extra bit of energy to cheer from the side lines and push me just that little bit further.
What was the highlight of your trip?
For me it was being able to play against some incredible teams! I had very limited knowledge of Ultimate in other countries so it was really eye-opening to see and hear from other women’s clubs about how they formed and how long they’ve been playing. I felt really proud to be supporting women’s sports! Watching the Japanese women’s team play was also incredible. I learnt so much from watching their game play. Their ability to generate inside breaks and move the disc across the field to the open lane was amazing.
What’s next on your Ultimate bucket list?
To try out for World Clubs! My ultimate Ulti goal at some point would be to layout and score on universe point in the grand final game for gold!