The Kaos Division 1 team travelled to Gold Coast last weekend,  22-25 April, to compete at the Australian Ultimate Championships (AUC) hosted at Runaway Bay. The team played 8 hard fought games over the 4 days and finished the tournament in 7th position out of 12 competing teams.

Day one met them with blustery and overcast conditions with their first game against team Factory from Canberra. Kaos went down 10-14, Factory went on to win the Bronze medal.

Game 2 against Rogue Block was begun with much anticipation, the team knowing that our supporters were watching on the live stream from home. A very close first half had the score at 7-8 in Rogue’s favour. Despite Kaos’ grit and determination (and Jade O’Callaghan’s outrageous Callaghan!) Rogue ran away with their lead to end the game 9-15. Rogue Block went on to win the Silver medal.

The final game of the day finally saw the windy conditions ease as Kaos faced off with NZ rivals Chch Chicks. The girls found some of their flow in this game and showcased their fitness in running out the game as 15-11 victors!

3 100 minutes games against quality opposition left most players stiff legged that evening. A pool recovery session and remote bedtime story from Bina had us well prepared for games on day 2.

Our first opposition that day were an evenly matched Zig Theory team from Adelaide. Windy conditions again hampered the game with both teams exhibiting great mental strength and perseverance to put on a show of amazing ultimate. The game came down to universe point which sadly went the way of Zig Theory 12-13. After fighting so hard Kaos were disappointed with the result but we knew we had played our best and had not been out done by the opposition.  We took this emotion into our final game of day 2 against Melbourne Phoenix and for the first time relished in a comfortable lead throughout the game. The final score was 15-4 to Kaos which gave the team an uplifting end to day 2.

At the end of the pool play Kaos had 2 wins and finished 3rd in our pool, on top of  a 3-way tie with Zig Theory and Chch Chicks. This lined us up against GWS blaze in the quarter final on day 3.

This quarter final went down as one of the games of the tournament. The two teams had never met before and traded amazing play for amazing play for the full 112 minutes. Emotions were running high and our legs and hands were performing to peak capability as Kaos stole back 2 points after the siren to bring scores to even, setting the stage for a huge universe point battle. The last point was an arm wrestle of immense proportions with the disc going back and forwards countless times. At one time Kaos had a clear break away but the windy conditions put the disc back in GWS hands and finally into the endzone to win the game. Realisation hit straight away but testament to the Kaos girls, we knew how hard we fought and how much everyone contributed to that game that we were not disheartened by the loss but extremely proud of our performance.

Our second game of day 3 was against Rogue rage, who were also coming off a universe point loss in their quarter final. The game started at a much slower pace with both teams showing their physical and mental fatigue but it quickly escalated into another full on battle. The final score was 13-15 to Rogue Rage, although we narrowly missed out yet again all of Kaos were extremely proud of a very hard and rewarding day of ultimate. We definitely got our money’s worth!

Our final game of the tournament on the morning of the 4th day was the play off for 7th place against old foes Zig Theory. Having already lost to this team Kaos were revved up to show them what we were capable of. And that we did. It was another tough game, and although we held a lead for most of the match the pressure never let up. The Kaos grit and our support of one another swept us to points cap ending the game 15-12 as the siren sounded.

What a weekend it was! Multiple times it was remarked that there had never been such a tight and hard fought nationals tournament for Kaos. The highlights reel for every player was endless with countless run-through D’s, layout scores, overhead grabs and all round fantastic ultimate.

Congratulations to everyone who took part, you are an inspiration. Very big thankyous to our coaches Sarah Brereton and Casey Peet who prepared our minds and bodies to perform at our best. 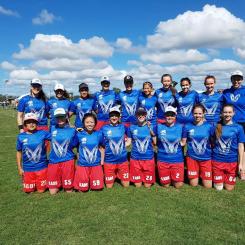 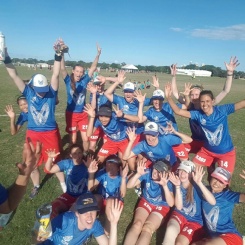 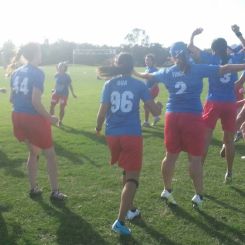