Kaos Ultimate Club takes pride in providing a club culture of not only a high-performance sporting environment for female athletes, but also fostering sportsmanship and community spirit. Which is exactly how our 48 athletes represented the club across 3 teams at the WA State Championships, Western Regionals, over the weekend in windy and humid conditions.

After a slower start in their first game against any opposition team, Kaos Blue began to gel and displayed their powerful long game to enjoy a clean sweep of 5 wins, taking out the Gold Medal for the tournament. Kaos Blue will be moving on to compete at the Australian Ultimate Championships in the Gold Coast, 22nd-25th April, and the 2018 World Ultimate Club Championships in Cincinnati, Ohio, USA from 14th-21st July.

Kaos White started their first game really strong and jelled quickly as a team, but had to adapt to the Zone Defence thrown at them learning some offensive structures which improved immensely over the weekend. They returned the favour trying out their own effective zone structure, securing themselves 2 wins for the tournament and finishing in a respectable 3rd place. Playing two days in the sun made them realise how important the strength and conditioning work they have been doing every Tuesday night with Fitness Coach Casey will become when they compete at the 2018 Australian Ultimate Championships Division 2  in Wollongong, 13-15 April.

Our third team Soak (which is Kaos spelt backwards for those playing at home) was made up mostly of training squad members and past players and do not regularly play together. With an impressive long game, their strength showed in the first halves when they managed to take opposition teams to a 7-7 tie in 3 separate games. Unfortunately they lost their momentum in the second halves and they finished in 4th place for the tournament, but they had a perfect mix of fun and competitiveness and were very happy with how they came together as a team.

In somewhat of a landmark achievement,  Kaos Blue also managed to secure the Spirit Medals! Sportsmanship in the Sport of Ultimate (Frisbee) is known as “Spirit of the Game” (SOTG or simply Spirit for short) and is critical for a self-refereed, non-contact, team sport. This has been a huge focus for Kaos Blue this season so the team is extremely proud. Teams are ranked by their opposition at the end of each game in the below categories:

Congratulations to all athletes involved. And a special thank you to our supporters, to Curtis Novacsek the Tournament Director, and all the volunteers who helped across the weekend and WA Ultimate. 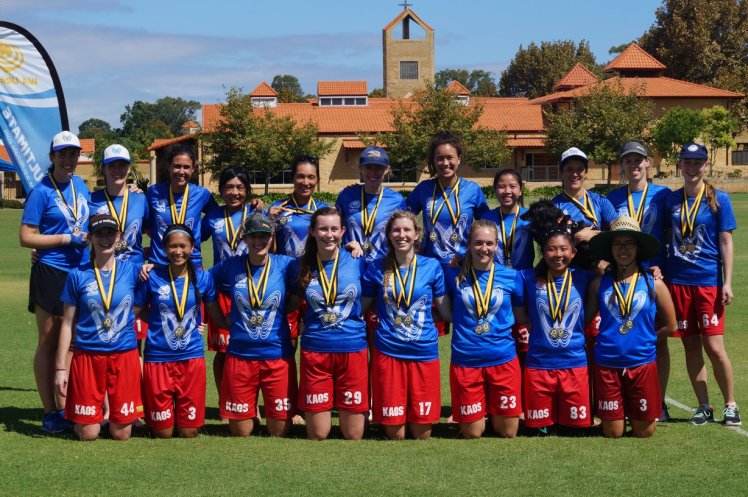